In medicine, the term opiate can refer to any of the narcotic painkilling drugs with opium-like effects, both natural, and fully or semi-synthetic. Traditionally, opiate refers only to the narcotic drugs that are naturally present in opium. A more appropriate umbrella term for all of the drugs derived from opium, both natural and synthetic, would be opioids. Opioids get their name from the fact that they are found in, or derived from drugs that are found in opium, which is the processed resin of the opium poppy (Papaver somniferum). 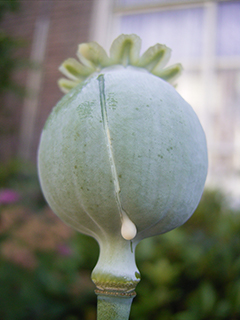 Opiates are among the world's oldest known drugs, with the therapeutic use of the opium poppy predating recorded history. Opiates bind to receptors in the brain causing strong analgesic (painkilling) effects by decreasing perception of pain, decreasing reaction to pain, and increasing pain tolerance. Common side effects of opiates include sedation, respiratory depression, constipation, and a strong sense of euphoria. Opiates can also cause cough suppression, and so are sometimes used to treat severe cough.

Continuous use of opioids can cause opioid dependance, leading to symptoms of opioid withdrawal with abrupt discontinuation. Opioids are well known for their ability to produce a feeling of euphoria, which is a mental and emotional state of intense well-being and happiness. This powerful euphoria is one of the reasons some choose to use opioids recreationally, and can often lead to opioid addiction.

Opioids are primarily used in the treatment of pain, and they have proved invaluable in the treatment of severe, chronic pain caused by terminal conditions such as cancer. When treating chronic non-cancer pain caused by degenerative conditions such as rheumatoid arthritis, opioids should be used cautiously. When opioids are used in the treatment of chronic pain, tolerance can develop over time. Tolerance is a physical reaction which makes the body less responsive to the painkilling and other effects of opioids, which results in a patient requiring a higher dose of the same medication to achieve the same effects.

Since the early- to mid-1900s painkilling opioid medications have been produced by several pharmaceutical companies and sold under countless brand names. Opioid painkillers are manufactured in many different forms including tablets/capsules (or pills), liquid oral solutions/syrups, liquid solutions for injection, patches, and suppositories. There is even a a fentanyl-containing lollipop that is marketed under the name Actiq. One of the main reason opioids are manufactured in several different formulations like this is because different opioids are more effective when administered in a certain way (e.g. the bioavailability of morphine taken orally is ~30% compared to 100% when administered intravenously).