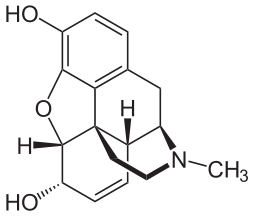 Morphine is a naturally occurring opiate found in the opium poppy. Its primary clinical use is in the management of moderate to severe pain, where it is regarded as the gold standard among analgesic medications designed to relieve pain. Morphine, named after the Greek god of dreams, Morpheus, was first isolated from opium in 1804 by a German pharmacist. By 1827 it was being commercially produced by the pharmaceutical company Merck and sold in the rapidly expanding global market.

Morphine, the most abundant alkaloid found in opium, composes on average 8-19% of the dry weight of opium from Papaver somniferum (the opium poppy). While the majority of pharmaceutical morphine is extracted from the opium latex of the poppy, processes using poppy straw (the roots, stems, and leaves of the plant) supply a percentage of pharmaceutical morphine as well. Most of the morphine extracted from both of these methods ends up converted into codeine, as codeine is found in much lower concentrations in opium, while worldwide codeine usage is also greater than the usage of morphine.

While morphine is not as prevalent in North American street drug culture, after heroin, morphine has a greater dependence liability than any other narcotic analgesic in common use. Morphine pills are commonly abused through several methods. After being crushed, the pills can be prepared from injection, smoked off a piece of foil, snorted, or the pill can be swallowed whole. Taken orally, the bioavailability of morphine is quite low(20-40%), so other methods are more commonly used by abusers looking a longer or more euphoric high.

Marketed as a single-ingredient drug available in both instant-release and extended-release formulations sold under a wide variety of brand names.