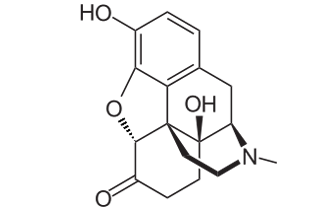 Oxymorphone, a semi-synthetic opioid analgesic 10 times more potent than morphine, is used in the treatment of moderate to severe pain. It is also sometimes used in anesthesia.

Oxymorphone was first developed in Germany around 1914, but was not introduced to the United States market until January 1959. In the United States, oxymorphone was available as tablets under the trade name 'Numorphan' until being discontinued in the 1970s due to the popularity of the pills among opioid addicts. In the IV drug using community, the Numorphan 10 mg instant-release tablet was one of the most sought-after and well-regarded opioids. The tablets, popularly known as "blues" for the light blue color, contained very few insoluble binders- making them easy to prepare for injection and extremely potent when used intravenously.

In 2006, both immediate-release and extended-release oxymorphone tablets were introduced to the North American market under the name 'Opana'. In 2012, Endo Pharmaceuticals released a new formulation for Opana ER tablets that have a new time-release mechanism. The old time-release mechanism could be defeated simply by crushing the tablet. This new formulation for the extended-release tablets, which is similar to the new OxyContin formulation, will be harder to be misused or abused by addicts.