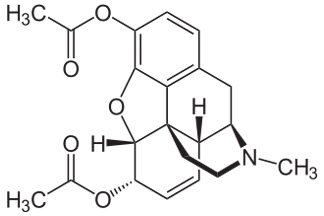 Heroin (or diacetylmorphine) is a semi-synthetic opioid derived from morphine. Intravenously-injected heroin causes a rush of powerful euphoria lasting a few minutes, followed by sedation lasting a few hours. Medically, heroin is no longer used in the treatment of pain except in the UK, where it is sometimes used in the treatment of severe pain caused by cancer or other terminal illnesses.

Heroin was first synthesized in 1874 by English chemist C.R. Wright. But its commercial value was first recognized in 1897 by Heinrich Dreser and Felix Hoffman at the Bayer pharmaceutical laboratory -- the same researchers who invented aspirin, which is is made by a similar process. Heroin was intended to be a less-addictive substitute for other common opiates.

In the late nineteenth and early twentieth centuries, heroin was common in over-the-counter medicines, but it was made illegal in the United States in 1924 through the Heroin Act. In the second half of the twentieth century, heroin was widely stigmatized as the quintessential illicit drug, as images of urban heroin addicts were propagated by media reports.

Heroin is primarily produced in Colombia, Mexico, Southeast Asia (especially Burma), and Afghanistan. Depending on how it is processed, it ranges from a thick sticky "black tar" to a brown, tan, or white powder. Street material varies greatly in potency from as high as 95% purity to as low as 5 or 10% purity. Heroin is most commonly injected (intravenously, intramuscularly, or subcutaneously), smoked, or insufflated (snorted).

None in North America. In the UK and the few other countries who offer prescription heroin for long-time addicts, pharmaceutical grade heroin is usually used in the form of a intravenous (IV) solution.

On the street, heroin is available in a powdered form, and in the form of a black tar. Purity can range from <1% to >90%, and users often never know what other substances the heroin may be cut with.

2-3 h *note: Heroin metabolizes into morphine quickly with a half-life <10 minutes. Morphine's half-life is listed instead.