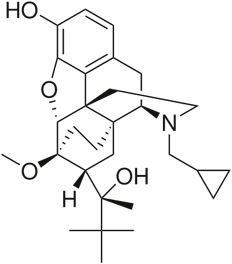 Buprenorphine is a semi-synthetic opioid analgesic used to treat opioid addiction as well as moderate acute and chronic pain. Although buprenorphine has been available since the 1980s, it was only in 2002 that it was approved by the FDA for use as an opioid-replacement therapy for individuals addicted to opioids.

When used by someone who is dependent on another opioid and not already in withdrawal, buprenorphine may trigger an extremely intense form of opioid withdrawal called "precipitated withdrawal." This is because buprenorphine binds more strongly to receptors in the brain than other opioids do, and when given in sufficient quantities, can block and reverse the effects of other opioids already present. This effect is very similar to the opioid antagonist drug naloxone, which is commonly used to counter the effects of an opioid overdose. Naloxone is also present in small quantities in Suboxone, a popular sublingual buprenorphine preparation used to treat opioid dependance.

Due to the chance of precipitated withdrawal, when buprenorphine is being used to treat addiction to other opioids, it is suggested that a person should wait until basic withdrawal symptoms appear before taking their first dose of buprenorphine.

Buprenorphine is also used recreationally, most commonly by insufflation (snorting) or injection. In addition to the euphoria and other effects common to most opioids, some recreational users report feeling a slight "upper"-like effect. Patients taking buprenorphine for addiction therapy have reported that obtaining euphoria is virtually impossible after the first few doses. Many users addicted to other opioid drugs will use buprenorphine to prevent withdrawal when they are unable to use their opioid of choice.